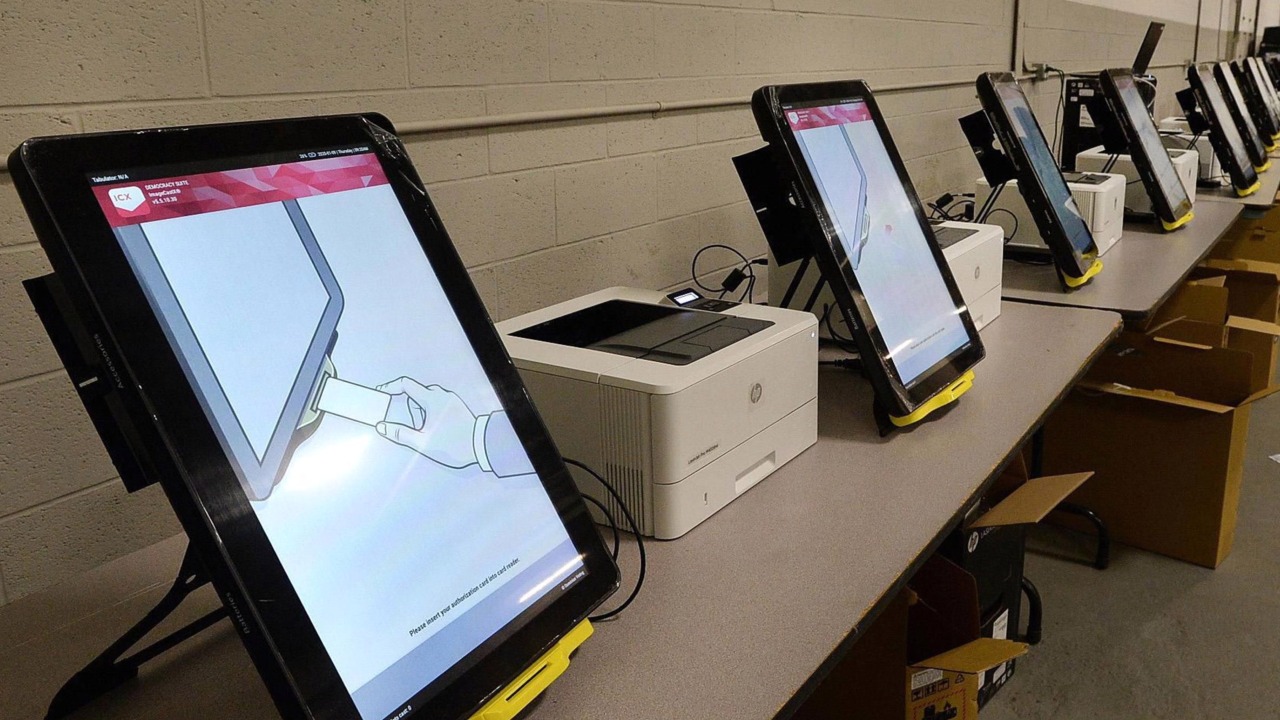 Various updates, including emergency memo, point to this issue not going away, despite mass media and Dems dancing on Trump’s political “grave”

The year 2020 won’t only be remembered for giving us a tyranny-tinged “pandemic” that is highly suspect in myriad ways; it will also be remembered as the year of the most, contested-and suspect-election in U.S. history. Of course, the very idea of relying so heavily on mail-in ballots, ostensibly over coronavirus transmission concerns, profoundly increased the incentives and the opportunity for foul-play right when the trans-nationalist establishment and its Marxist-Democrat-media minions have been aching to dump Trump.

And, as of this writing Nov. 25, electronic voting machine companies, such as Dominion Voting Systems, and their proprietary software run by secretive source code-are another huge dimension of the problem of election fraud. This aspect is finally being seriously discussed in varying degrees, and to some extent exposed, by Fox Anchors Lou Dobbs and Tucker Carlson, by “Breitbart News” and, among several other places, by Sidney Powell, the former Texas District Attorney who has joined forces on President Trump’s legal team with attorney and former New York City Mayor Rudy Guiliani in their challenging effort, wildly ridiculed in the orthodox press, to try and prove that Donald J. Trump actually won the election by seeking injunctions in state courts to stop vote-count certifications.

BACK TO MAIN STORY

As of Nov. 25, some of the legal team’s best evidence, presented at a Nov. 19 press conference at the Republican National Committee headquarters in Washington D.C., is as follows:

·      According to Guiliani, there are an estimated 220 sworn affidavits from Michigan witnesses of election fraud, many of which are in the public record. Guiliani said about 300,000 allegedly unlawful votes could be invalidated in a court of law-which exceeds Biden’s 154,188-vote “victory” in the Great Lakes State (a figure from Michigan’s unofficial results on the Secretary of State website).

·      In Wisconsin, Guiliani said that about 60,000 ballots in Milwaukee County and 40,000 in Madison, never had ballot applications in a state with extra-strict voting laws. Indeed, Wisconsin was among the few states that disallowed mail-in ballots. Guiliani explained that Wisconsin law also forbids unsolicited absentee ballots; therefore, any such ballots that never had a prior ballot application attached to them are invalid. “In other words, if you count the lawful votes, Trump won Wisconsin,” Guiliani summarized.

·      As for Michigan, the apparent fraud includes an incident in which witnesses testified, via affidavits under penalty of perjury, that at 4:30 a.m. Nov. 4, a truck pulled into the Detroit counting center (some election workers thought it was a food delivery so they approached the vehicle). But the witnesses on record say the truck was packed with “thousands and thousands of ballots; the ballots were in garbage bags, paper bags and cardboard boxes,” as Guiliani related at the above-noted press conference, while adding that these ballots were taken into the counting facility and placed on several tables.

Those handling the trucked-in ballots thought that Republican observers had departed for the night, but two remained, as did a Dominion Voting Systems employee. All the ballots appeared to be for Biden, witnesses claim, and the number of ballots was thought to be at least 50,000 and maybe upwards of 100,000.

In the pending lawsuit Costantino v. Detroit, which Guiliani referred to several times-while admonishing the reporters at the D.C. press conference to do their job and look it up, instead of instantly dismissing all election-fraud claims-the witnesses’ sworn statements include (according to the actual suit posted via the Great Lakes Justice Center):

·      “Ballots were counted even though the voter’s name did not appear on the official voter rolls.

·      “Election workers processed ballots that appeared after the election deadline and falsely reported those ballots had been received prior to the Nov. 3, 2020 deadline.

·      “Defendants used false information to process ballots . . . . Many times, the election workers inserted new names into the Qualified Voter File and recorded these new voters as having a birthdate of 1/1/1900.

All told, according to the evidence that Guiliani summarized for reporters, “In the states of Georgia, Pennsylvania, Michigan, Wisconsin, Nevada and Arizona, we have more than double the number of votes needed to overturn the election, in terms of provable illegal ballots.”

NEWS BULLETIN No. 2: World Net Daily also reports that at a public hearing Nov..24 held by Pennsylvania lawmakers and President Trump’s campaign, a witness drew gasps when he described “spikes” in the vote count the evening of the election in which Joe Biden gained 570,000 votes to the president’s 3,200. The spikes in Philadelphia and Pittsburgh came after Trump held a lead of some 700,000 votes. The official count ended with a Biden lead of some 80,000.

Sidney Powell’s remarks, much like Guiliani’s, presented an evidentiary framework that would be more fully revealed and confirmed, if and when such matters see the full light of day in the courts. She supplemented Guiliani’s remarks by saying there’s evidence that U.S. votes were electronically sent outside the U.S. to be tallied, while being prone to hacking.

She also said that Dominion Voting Systems and the Smartmatic software company lie at the center of the electronic aspects of the Nov. 3 election fraud, and that the software’s chief characteristic is its ability to “flip” votes-“based on algorithms that probably ran all over the country to a take a certain percentage of votes for President Trump and flip them to . . . Biden.”

A key point she added is that the evidence of this vote-flipping (which is attached to the pleadings in a Georgia lawsuit) might not have been found where it not for Trump’s votes being so “overwhelming in so many of the states” that it “broke the algorithm that had been plugged into the system and that’s what caused [officials] to have to shut down [the vote count]. That’s when they came in the back doors with all the mail-in ballots, many of which they had actually fabricated.”

Meanwhile, covering broader matters, Powell announced that Dominion executives evidently have abandoned their Toronto office space, which she said was shared “with one of the [George] Soros entities.” Furthermore she noted that “one of the leaders of the Dominion project overall is Lord Mallett Brown-Mr. Soros’ number-two person in the UK,” to which she added: “There are ties of the Dominion Leadership to the Clinton Foundation.”

And while Powell claimed that a Dominion vote-theft system used in the 2020 U.S. election was previously tested and perfected in Venezuela when the nation’s now-deceased socialist-populist leader, Hugo Chavez, allegedly used it to hang on to power, this WIN writer determined, through readily available evidence that the Mass Media Cartel ignores, that Peter Neffenger, a former vice commandant of the U.S. Coast Guard, is CEO of Smartmatic and is a member of Biden’s transition team for the Department of Homeland Security.

IMPORTANT NOTE: Veteran election fraud watchdog Jim Condit Jr. of Cincinnati, Ohio, who runs several highly informative websites, especially Election Night Gatekeepers about deep-seated media complicity in election theft, said he hopes the revelations about Dominion, as earth-shattering and long-overdue as they appear to be, do not constitute a “limited hangout” in which the world’s voting machine syndicate allows some exposure of one of its companies in order to manage the crisis and “protect the whole.” Condit said that the two other major U.S.-based electronic voting machine companies, which combined with Dominion constitute “The Big Three,” are Hart InterCivic of Austin, Texas, and DS&S of Omaha, Neb. Those other companies, Condit insists, also need to be scrutinized and subpoenaed to appear in court.

ALSO READ CONDIT’S EMERGENCY MEMO TO THE TRUMP TEAM HERE, in which explains effective ways for the Trump Team to change their strategy against the Mass Media Cartel and its Democrat allies in order to win the propaganda war and put the media machine on the defensive.

The lesson from all this? All votes must be marked on paper ballots that must be openly counted by hand in each local voting precinct, in full public view (open to everyone in-person and via real-time video feed). This must be done before the ballots leave the precinct to go to secure central tabulation and storage facilities. No exceptions.