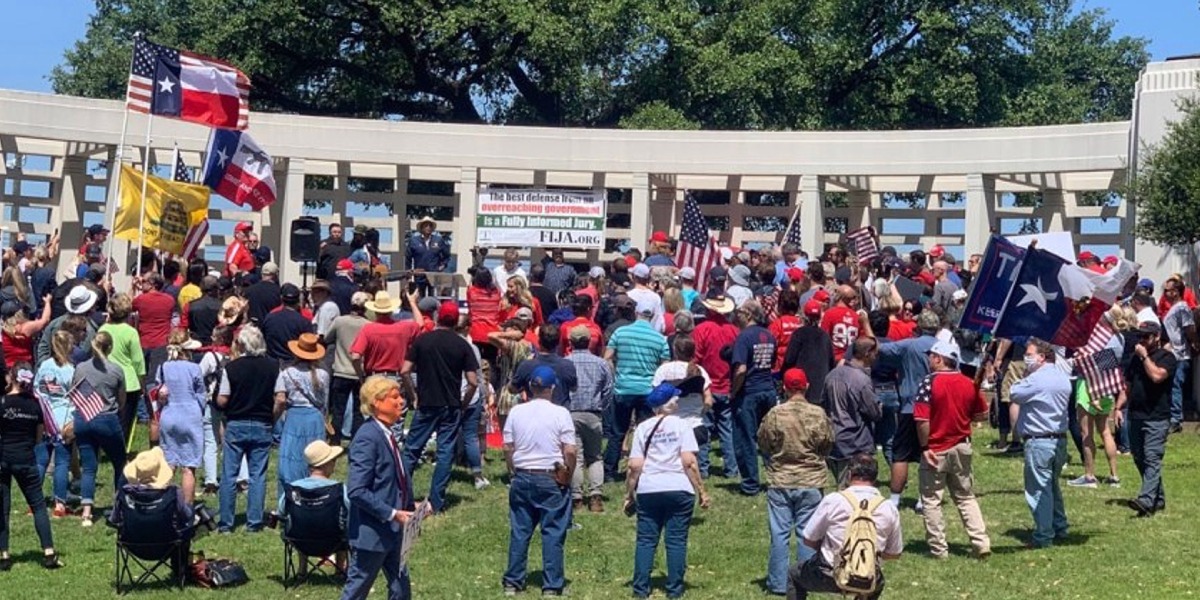 A growing number of Americans feel their rights should not be sacrificed in the name of a medical and media establishment whose one-size-fits-all worldview regarding Covid-19 portends nothing but more restrictions, risky experimental vaccines and the possibility of traceable “tattoo implants” in our future.

To express their concern over the fact that many state and local governments are routinely diminishing key First Amendment rights-speech, assembly, religion-amid questionable Covid-19 “case” and “death” counts, thousands of Americans have turned out for rallies in latter April and into May, hitting the beach of Huntington Beach, California, and flooding the Michigan state capitol grounds and building in Lansing, where some citizens openly but peaceably carried their AR-15s.

Rallies also have been happening in Austin, Texas and in Washington, D.C., the latter of which saw a large turnout of riot police near the U.S. Capitol-much to the dismay of military veteran and social media activist Grant Bynum, who saw the show of force as a bad sign unless Americans bravely assert their God-given rights.

Of particular interest is the group Open Texas, whose Facebook page says there are regular rallies on Tuesdays in May at 11 a.m. in Dallas at Dealey Plaza on the infamous grassy knoll, along Elm Street where the JFK shooting took place in 1963.

At a May 9 rally at that landmark plaza, renowned Christian-constitutionalist author David Barton offered insightful remarks about the profound endurance of the U.S. Constitution and the fragility of the Covid-19 narrative.

“The average length of a constitution in the world is 17 years,” Barton told the crowd. “We’ve had our Constitution for 233 years. I’ve talked to people in Poland who’ve lived through seven constitutions in their lifetime.”

Barton added: “We’re blessed. I think John Adams put his finger on it; he said, ‘We’re a government of laws, not of men.’ It’s not the opinions of people that guide us; it’s written documents that guide us.”

He added that the Constitution “is written [based] on principles that don’t change across time,” comparable to the laws of motion. “And when you understand those principles, it gives longevity to what we do.”

And even though everyone from “dogcatcher to president” takes an oath to uphold and defend the Constitution, the problem, said Barton, is that few officials understand its structure or purpose, on top of the fact that proper civics is scarcely taught in school anymore.

That helps explain why so many state and local officials, and some federal officials, so easily jeopardize the Bill of Rights when faced with an apparent pandemic, he reasoned.

Barton also challenged the dominant narrative by noting that, throughout American history, there’s been some sort of major epidemic or pandemic, on average, every 15-18 years.

He continued, “As much as we’re hearing about how lethal this thing (Covid-19) is, if you go to the yellow fever epidemic of 1793, the mortality rate in cities like Philadelphia was 25%. There’s 6.4 million people in Dallas County. If we had the same mortality rate that they had [in 1793], we would have 600,000 in Dallas County dead right now. We have 111 dead.”

And while noting that every life lost is regrettable, Barton summarized that while the U.S. has faced mass illness before, “the difference today is how our public officials are responding to it.”

Although many public officials have embraced rules that many see as draconian, some public officials have been pushing back against lockdowns. In Michigan, where the lockdown, like those in California and New York, has been especially strict, Circuit Court Judge Matthew Stewart declined to sign an order shutting down a barber for defying the state’s Covid-19 lockdown. Several Michigan sheriffs have balked at the lockdown as well.

Noted beautician Shelly Luther also spoke at the May 9 Dallas rally. She made headlines when Texas Gov. Greg Abbott countermanded city officials for arresting and jailing her for two days, for opening her salon because she needed to feed her family.

At a Frisco, Texas rally back on April 26, just before Abbott began reopening Texas in phases, Ms. Luther tore up the citation that Dallas police issued to her when she reopened her salon during the city’s lockdown.