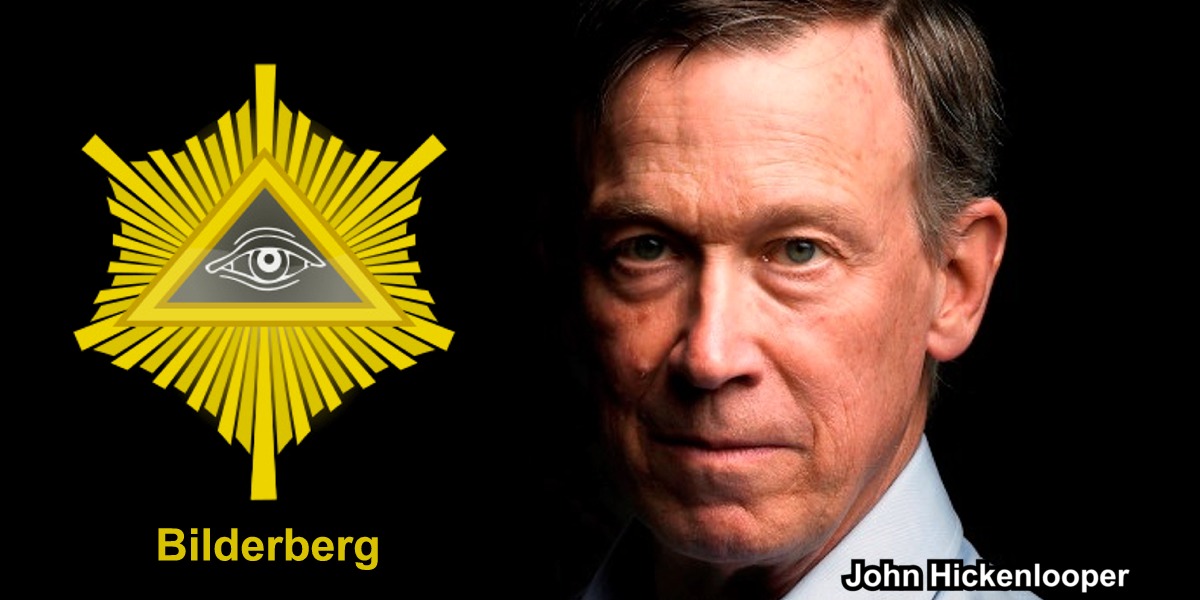 Meanwhile, in another rare turn of events, Bilderberg’s 2020 meeting was postponed due to coronavirus. But will they come out of hiding in 2021?

WIN has learned that Colorado’s Independent Ethics Commission will in fact conduct a hearing on June 4 about former Colorado Gov. John Hickenlooper’s private business travels to determine if state law or the state constitution were violated when “Hick,” as he’s called for short, attended the highly secretive Bilderberg Meeting of 2018 in Turin, Italy.

Although four other business trips taken by Hick are on the table as well, this probe shines an unusually bright light on the Bilderberg gatherings. Notably, the elite 2020 gathering, in a rare turn of events, has been postponed (see more at end of this article).

The gatherings have been happening since 1954, amid spotty and usually tepid mainstream news coverage that typically scoffs at Bilderberg’s significance and fails to reveal Bilderberg’s status as a world planning and networking cabal that helps build technological, financial, informational and political frameworks for unaccountable global governance and deep-state machinations.

The confirmation of Hick’s hearing from a commission staffer was secured by WIN May 18-following an extended period of speculation as to whether his case would be dismissed.

The most recent proposed hearing date was April 28, following other delays in a probe that stems back to about mid-2019. The June 4 date appears to be a “go” and will take place at 9 a.m. Mountain time. It will be livestreamed on the Ethics Commission’s website.

But since the commission dragged this matter out over several months before finally announcing that hearing date, Hick managed to again enter the political arena; this time he’s vying against one major opponent for the Democratic nomination to challenge incumbent U.S. Sen. Cory Gardner (R).

Interestingly, the conventional press in Colorado has handled Hick with “kid gloves,” cutting him considerable slack by rarely mentioning that an ethics probe even exists whenever reports are issued about his Senate candidacy, thereby largely avoiding any mention of the Bilderberg Meetings or Hick’s connection to them.

Previously, Hick was an early Democratic would-be candidate seeking the party’s nomination to challenge President Trump in the 2020 election, but that effort quickly fizzled.

Although a 31-page investigative report produced by the Ethics Commission and released in November 2019 stopped short of drawing conclusions, the report looks into a total of 5 trips that Hickenlooper took, apparently on private planes, in 2018 while he was still governor, with considerable emphasis on his June 2018 trip to the Bilderberg Meeting.

The ethics complaint was filed by former Republican Speaker of the Colorado State House Frank McNulty, who created the Public Trust Institute in October 2018-just two days before filing, and right before Hickenlooper left the governor’s office.

In a matter that is giving Bilderberg’s organizers a highly unusual and uncomfortable degree of publicity, McNulty was quoted as saying: “This investigation . . . underscores the fact that ‘Hick’ is guilty of a pattern of illegal activity under Colorado law. There was no justification made for his travel on private jets or for the gifts he received as part of the Bilderberg Meetings. We look forward to the commission hearing on this. It’s an open-and-shut case.”

When asked about Hick’s situation, Bilderberg’s own “Media Team,” whose location and staff are kept anonymous, tersely replied: “With regard to how the Bilderberg Meetings are financed, please note that the hospitality costs of the annual Meeting are the responsibility of the Steering Committee member(s) of the host country. Participants take care of their own travel and accommodation costs. Please understand that we generally don’t make additional comments on this matter.”

The core concern is whether Hick may have functioned like a lobbyist representing private interests while he was governor of Colorado.

According to the original Colorado complaint, the breach-of-ethics allegations against him concern his 2018 trips “on private jets owned by for-profit corporations both domestically and internationally.” The complaint also alleges that Hickenlooper “illegally accepted luxury hotel accommodations and expensive travel expenses from corporations.”

The remaining trips being probed besides Hick’s Bilderberg attendance in Italy include his August 2018 attendance at the Bilderberg-connected American Enterprise Institute’s (AEI) Jackson Hole Symposium (AEI has at times has sent representatives to the Bilderberg Meetings). Then there was a Connecticut trip in March 2018 for the commissioning of the USS Colorado; private travel to New Jersey in January 2018; and a wedding in Texas in April 2018. Notably, when Hick attended the Bilderberg Meeting, hundreds of acres in Colorado were ablaze from wildfires that scorched the area.

But why would a socially liberal Democrat such as Hickenlooper be interested in AEI? Isn’t it populated mainly by social conservatives who are devoted to protecting the rich and powerful and projecting military force globally like all “good” modern republicans?

Well, yes, but common ground in the world of elite think tanks like AEI and “big-brother” Bilderberg is established by transcending mere partisan differences in the larger interest of co-opting and potentially shutting down nation states in a “soft-power” revolution that overturns traditional geo-political norms in favor of a new world order where the only constituents represented in “government” are corporations, especially banking interests. The end-game appears to be the outright privatization of government itself, not simply the privatization of governmental banking powers (accomplished long ago throughout most of the world), nor just the privatization and monopolization of natural resources (and various other economic assets, sectors and systems) by the world’s most powerful companies.

But all that helps explain why, after his attendance at Bilderberg, Hick announced his early candidacy for the presidency on the Democratic ticket. His lukewarm campaign was short-lived, but in order to continue his “audition’ for moving up the “globalist ladder,” the former Denver mayor spoke to Chicago Council on Global Affairs (the former Chicago Council on Foreign Relations) about one year ago on May 20, 2019. There, despite his party affiliation and generally liberal image, Hickenlooper delivered a speech that echoed several edgy neo-conservative themes that were philosophically in tune with AEI-affiliated neo-cons who’ve attended Bilderberg several times, including political scientists Richard Perle (a former Bilderberg Steering Committee member) and Paul Wolfowitz-both of whom have long supported a foreign policy of aggressive U.S. military interventionism.

And it’s noteworthy that Jackson Hole, Wyoming itself is a “global city,” of sorts, since it’s also the location of a major annual summer meeting of central bankers and commercial bankers from the U.S. and other nations. The meeting is a virtual “Bilderberg” of bankers, although it’s nominally more open and admits a limited number of working financial reporters, whereas Bilderberg has a more diverse attendance and its approximately 12 annual media attendees (writers, editors, executives) are direct participants who are sworn to secrecy.

Except for the year 1976, when the annual Bilderberg meeting was not held because Bilderberg co-founder Prince Bernhard of the Netherlands was embroiled in the infamous scandal concerning the defense contractor Lockheed, the shadowy meetings have gone off without a hitch.  However, the Bilderberg Media Team has confirmed that the 2020 Bilderberg gathering of political, financial, media, banking, technological and military high-flyers has been postponed over Covid-19.

This decision was reached “in line with worldwide travel constraints and prevention efforts” regarding the coronavirus, according to an email the team sent to this writer on April 22. The email answered an inquiry that WIN sent to Bilderberg’s media outlet, in which this writer asked whether the coronavirus response might lead to the cancellation or rescheduling of the 2020 meeting. So far, Bilderberg’s media outlet is insinuating the meeting will simply be postponed. And there’s no word yet, as of this writing, whether the meeting might be held in the “virtual” sense, via Zoom or other interactive online platforms.