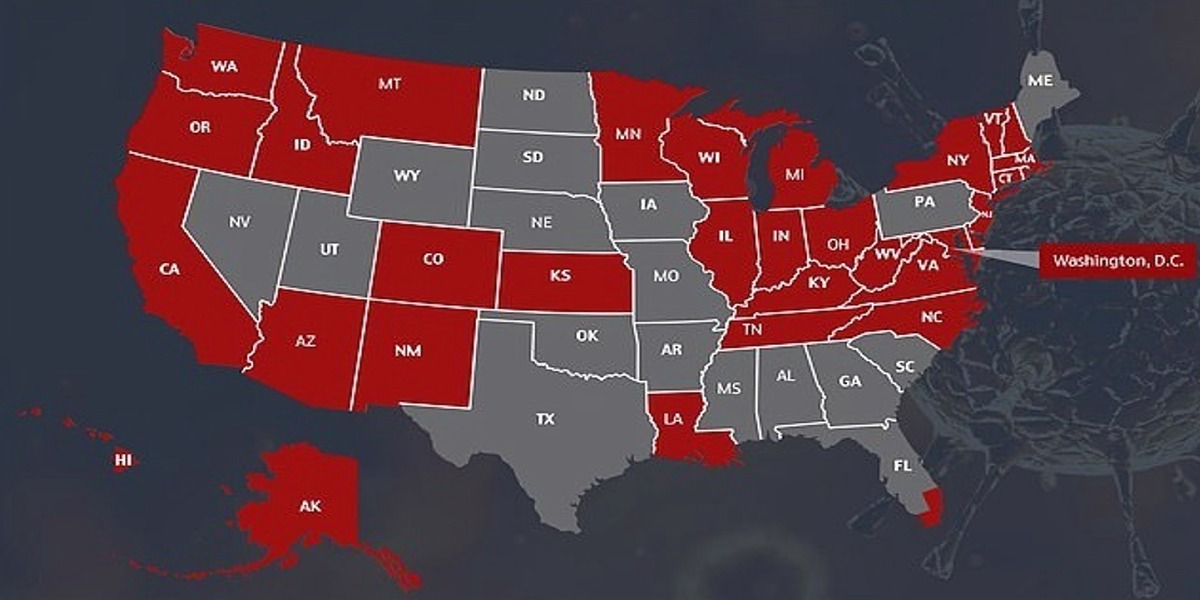 States like South Dakota, Nebraska, Wyoming, Arkansas, South Carolina, Georgia, Texas and Oklahoma, are emerging as the relatively “free states” whose leaders basically trust their people to exercise commonsense Covid-19 precautions without a widespread closing of their economies, without severe home shut-ins, and without the imposition of heavy fines and jail time, as is being done in what one might call the “slave states.”

The biggest headlines, regarding erring on the side of freedom, have come from South Dakota, where a Congresswoman-turned-governor, Kristi Noem (R), has maintained that she would simply trust the state’s approximately 880,000 citizens to responsibly go about their daily lives without the threat or application of stiff fines and jail time that subjugates the people in California, New York, Michigan and other states enacting especially oppressive Covid-19 control rules.

Indeed, economy-crippling, socially corrosive policies in Michigan and California have sparked multiple protests. Michigan already has had two large protests where some attendees openly and legally and peacefully carried AR-15 rifles close to, and even inside of, the Capitol building in Lansing to show their resolve. In California, a huge May 1 Huntington Beach protest saw thousands of fed-up people storm the beachfront without masks. On May 9, protestors planned on gathering outside the residence of Los Angeles Mayor Eric Garcetti.

Los Angeles Mayor Eric Garcetti (D)said Monday, May 4 that he does not expect the city to reopen Friday despite Gov. Gavin Newsom having announced that some businesses may be opening around the state by the end of the week, or about May 8.

While South Dakota Gov. Noem has received some pushback for her decision to allow South Dakotans to decide whether to follow the state’s basic guidelines regarding social-distancing and other practices that ostensibly reduce coronavirus cases, to be sure, she hasn’t been overly casual about the matter.

When the sponsors of two car races decided to utilize the Park Jefferson International Speedway and the New Raceway Park, Neom expressed her opinion that perhaps that’s not a good idea for the time being. However, the sponsors voluntarily opted to limit the number of tickets to be sold for each event, in order to shrink the crowd and maintain adequate social distancing. Accordingly, Noem said she would not move to prevent the races from happening.

But, as Noem told Breitbart News on April 22, despite her decision to refrain from enacting a Covid-19 crackdown, a significant surge in virus cases, projected by various predictive models, failed to materialize:

I think we’ve got maybe 60 people in the hospital right now. We have 2,500 beds set aside for COVID-19 patients, but we only have 63 in [the hospital] . . . .We already have cut our peak projections by 75 percent just putting in place the recommendations I asked people to do, staying at home and [practicing] social distancing. They’ve washed their hands and they’ve stayed home if they weren’t feeling well and called their doctors. Just by doing that, we’ve cut the hospitalization rates by 75%. So, I’ve just been super proud of what the people in South Dakota have done-they recognized that I wasn’t going to dictate to them, that I valued their freedoms and liberties and that I was going to let them take action on behalf of their families and communities.

Asked why she didn’t institute a state-wide shutdown, she refreshingly replied:

The facts on the ground here did not support shelter-in-place . . . . For me personally, I took an oath to uphold our state Constitution. I took an oath when I was in Congress [in the House from 2011 to 2019] to uphold the United States Constitution. So, I believe in people’s freedoms and liberties and I always balance that with every decision that I make as governor. I get overly concerned with leaders who take too much power in a time of crisis . . .

Noem summarized: “I trust my people. I know that if business owners here are given an opportunity to be innovative, they will protect their customers.”

Meanwhile, Georgia Gov. Brian Kemp has been enduring heavy ridicule for being among the first governors to contemplate a nearly complete re-opening of a statewide economy-with the invective coming largely from the monopolistic medical and media establishments that had prophesized hundreds of thousands, if not millions, of U.S. Covid-19 deaths.

However, the U.S. nationwide death estimate, which is really just guesswork, was around 78,248 as of this writing on the afternoon of May 8. While that estimate presupposes that the national death count is verifiably linked to Covid-19 as the actual cause, it’s nevertheless on par with a rather severe case of the standard seasonal flu, for which lockdowns were never considered in past years.

Get this: The National Vital Statistics System, or NVSS (a CDC division that functions as a national data-sharing system) on March 24, 2020 announced a new ICD Code for categorizing Covid-19 deaths. Starting with a question and then answering it, the announcement says:

QUESTION: “Should Covid-19 be reported on the death certificate only with a confirmed test?”

ANSWER: “Covid-19 should be reported on the death certificate for all decedents where the disease caused or is assumed to have caused or contributed to death.”

Interestingly, the underlined part of the ANSWER was highlighted in the original statement by the NVSS. World Impact News did not add the highlight.

Over in Texas, Gov. Greg Abbott (R) issued an executive order dated May 7 that compliments his plan to open up components of the economy in phases. That order took zealous municipal officials to task for jailing business owners who moved ahead of state and local guidelines to reopen so they could earn a living and feed their families. In his order to eliminate confinement as a punishment for the allegedly violating distancing and lockdown orders, while naming specific business owners, Abbott explained:

Throwing Texans in jail who have had their businesses shut down through no fault of their own is nonsensical, and I will not allow it to happen. That is why I am modifying my executive orders to ensure confinement is not a punishment for violating an order. This order is retroactive to April 2nd, supersedes local orders and if correctly applied should free Shelley Luther [A noted salon owner in Dallas]. It may also ensure that other Texans like Ana Isabel Castro-Garcia and Brenda Stephanie Mata who were arrested in Laredo, should not be subject to confinement. As some county judges advocate for releasing hardened criminals from jail to prevent the spread of COVID-19, it is absurd to have these business owners take their place.”