Joe Arpaio Has Contracted A Case of the Four-Year Itch 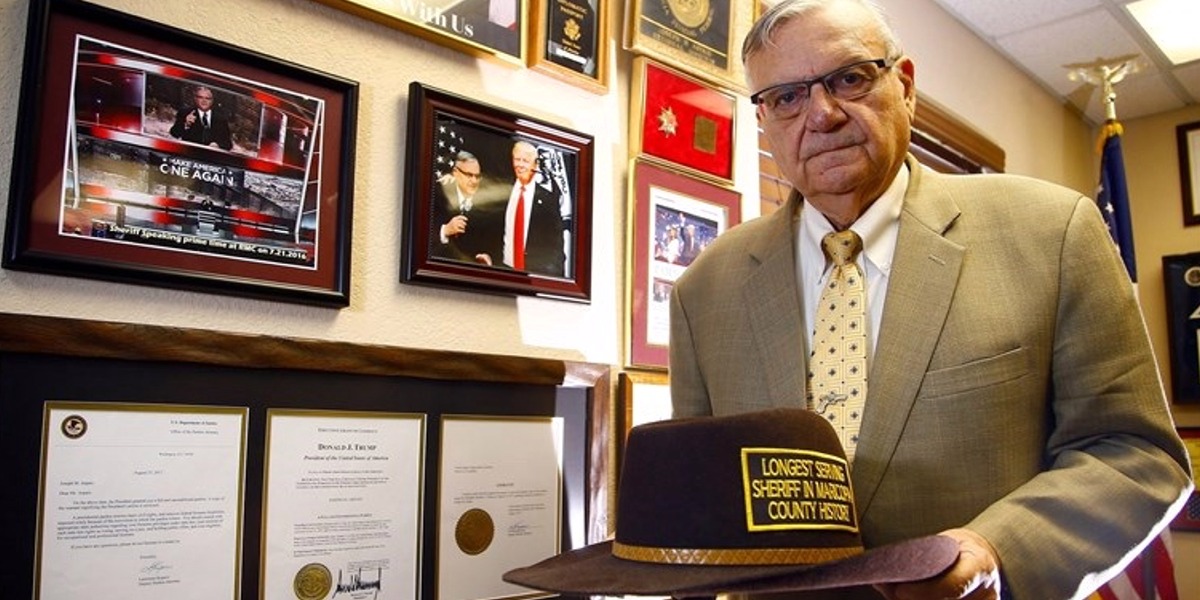 Joe Arpaio-the longest-serving sheriff in the history of Maricopa County, Ariz.-has contracted a case of the “four-year itch.” Arpaio took a serious but ultimately unsuccessful stab at a U.S. Senate seat (currently held by GOP Sen. Martha McSally) during his full term away from the sheriff’s post he held for 24 years. He has now decided to seek reelection to that office. Arpaio talked with this WIN writer about the Covid-19 situation and the unique constitutional and procedural challenges it presents.

Although he’s not yet at liberty to fully disclose specifics on how he’d handle lockdowns and other coronavirus-related government policies, he said, he tends to agree with two other Arizona sheriffs who prefer constitutional liberty over state, county, and municipal edicts on social distancing, mask-wearing, and business limitations.

Those sheriffs, Pinal County’s Mark Lamb and Douglas Schuster of Mohave County, have gone on record saying they refuse to ticket or arrest citizens for violating Covid-19 restrictions on gatherings, movement or business operations. Several sheriffs in Michigan, Idaho, Maine, and elsewhere have made similar announcements this spring.

“When I get back in office,” Arpaio said optimistically, “I will make some tough decisions and protect all the people. Right now, I am not going to talk about lockdowns one way or the other, but I’ll be taking some drastic actions. I know there is some overkill. I know the guy I’m running against [Democrat Paul Penzone] has a hotline for reporting violations of these Covid-19 orders.”

“I am a big proponent of business. I feel very sad about what they’re doing under the guise of the virus,” the former Drug Enforcement Agency officer continued, adding that he believes President Donald Trump is on the right track in dealing with the Covid-19 issue. “I am out meeting people and campaigning, and I am not wearing a mask.”

He added: “The mass media’s got another trick now. They want to make me irrelevant by not covering my candidacy, and they won’t report negatively on the incumbent because that would be a way of helping me. A lot of people don’t even know I’m running. The media also uses the age thing on me [Joe was born June 14, 1932], but I rely on the people. I never ask for endorsements.”

Asked about Ohio and several other states sending plain-clothes officers into recently reopened bars and restaurants to eavesdrop on people who aren’t standing far enough apart or are gathering in groups larger than allowed, Arpaio said: “That’s what we’re coming to. As far as I know, we haven’t suspended the Constitution, though concerns about public health are always important. I believe that the voices of healthy citizens who are struggling to put food on the table for their families, who want to protect the businesses they have spent years developing, or who want to worship God should be heard and respected. They aren’t criminals.”

While noting he has Republican primary challengers in the 2020 election, whom he feels he can readily defeat, Arpaio is largely focused on the incumbent Democrat. Accordingly, he concluded: “I am in it to win, and I’m taking no prisoners. I’ve got to get in there, and Trump has to stay in office.”

Arpaio, who has spent a total of 56 years in law enforcement, then added: “I also am writing a book, which should be out in July. I am not pulling any punches. It will be my third book, but this one will be different.”

Notably, Arpaio was railroaded out of his Sheriff’s post by the Obama administration in late 2016, a complex affair that his new book is expected to fully illuminate. Arpaio’s notoriously tough stance and effective actions against illegal immigration earned him plenty of enemies in the Marxist-oriented White House at the time.

Arpaio’s first two books, which he co-wrote, are Joe’s Law: America’s Toughest Sheriff Takes on Illegal Immigration, Drugs and Everything Else That Threatens America with Len Sherman and Sheriff Joe Arpaio: An American Legend with David Thomas Roberts.

Roberts, of Defiance Press & Publishing in Conroe, Texas, is publishing and co-authoring the new book, the title of which had not been finalized when this article was posted. The publisher’s website says it will detail Arpaio’s life story and will “shake up local and federal government, current political figures, and the bias of the fake news media,” quoting Arpaio himself.