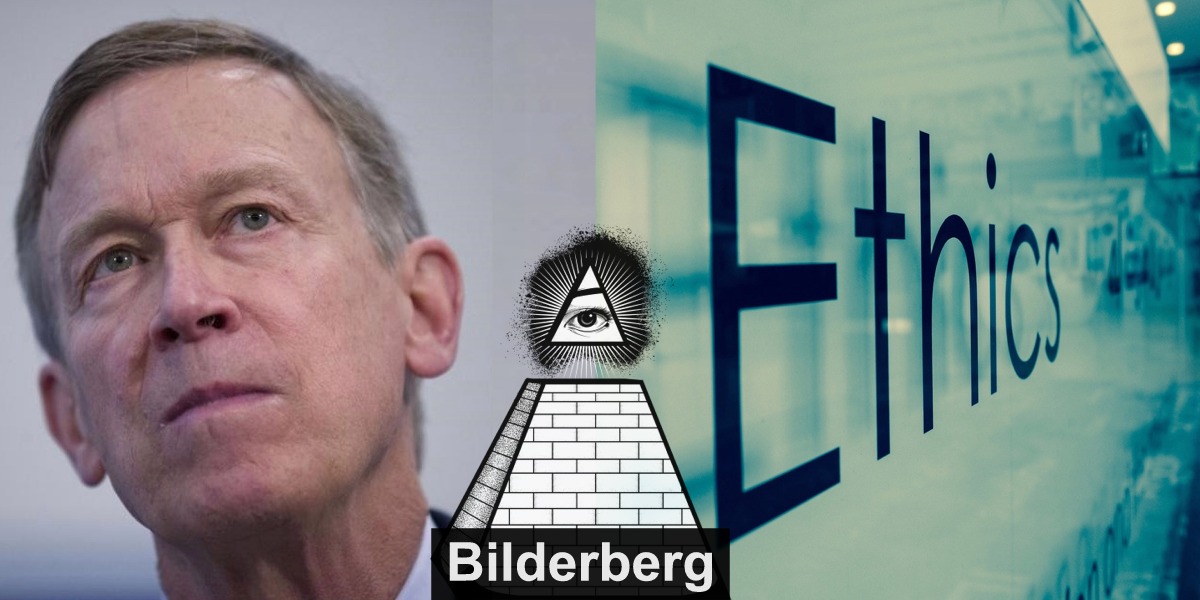 On June 5, Colorado’s Independent Ethics Commission (IEC) unanimously found former Gov. John Hickenlooper (D) in violation of state ethical standards by accepting prohibited gifts and perks while attending the 2018 Bilderberg Meeting in Turin, Italy. This marks a historic judgment against an American elected official for attending Bilderberg’s highly secretive annual confab. It is now the time of year that Bilderberg would normally meet but isn’t doing so due to their alleged fear of Covid-19.

What’s more, the IEC voted unanimously on June 4 to find Hickenlooper in contempt of IEC proceedings for not showing up, in violation of a subpoena to participate in that day’s hearing. Thus, the former Denver mayor had to swallow some humble pie in order to participate in the June 5 hearing, where he fielded scores of questions about his Bilderberg trip and several other trips in 2018 when he was still governor (2011 to 2019). The IEC is a “constitutionally created independent commission charged with the implementation of Article XXIX of the Colorado Constitution,” on ethics in government.

Hickenlooper had skirted prior IEC hearings as well, so the panel was rather infuriated and resolutely voted to find him in contempt. Consequently, an additional meeting was slated for June 12 to decide whether to impose sanctions against Hickenlooper for not showing up on June 4, which imposed additional costs and delays on the IEC, already overloaded with cases.

The two days of IEC hearings concerning Hickenlooper-which involved about 14 hours of scouring the details from his travels in 2018-were held virtually, due to Covid-19. This writer attended via an online meeting platform.

The original complaint about Hickenlooper’s trips was filed with the IEC in mid-2019 by former State House Speaker Frank McNulty (R). Suzanne Staiert served as complainant McNulty’s legal representative at the hearings, while Hickenlooper was defended by attorney Mark Grueskin.

In accordance with the IEC’s mandate, the testimony was weighed against the standards established by Amendment 41 to the state constitution. Approved by voters in 2006, the amendment, which created the IEC, is one of the strictest in the nation in terms of seeking to prevent improprieties. If conflicts of interest occur-including in many instances even the perception of impropriety-sanctions can be handed down. Yet officials who are unclear on whether travel plans, for instance, might present conflicts can approach the IEC beforehand to receive clarification, something that Hickenlooper overlooked or ignored in many instances.

Hickenlooper’s attendance at Bilderberg 2018 was his first ever at the globally unique gathering of the rich and powerful from the public and private sectors. And it appears he was the only American elected official at that particular meeting, which was hosted by Fiat-Chrysler. The IEC panel did not believe Hickenlooper’s vague recollection under oath that the $1,500 he paid with his personal funds upon checkout from the hotel where Bilderberg met in Italy covered not only the hotel but also several catered meals, cocktail hours, transportation to and from the hotel in a Maserati limo, two field trips, and other perks and amenities.

What’s more, the IEC noted that, despite Grueskin’s detailed defense to the contrary, Hickenlooper’s attendance at Bilderberg did not serve the state’s interest under Amendment 41.

Asked why he attended Bilderberg, Hickenlooper said the Bilderberg Steering Committee had him speak in panel discussions regarding Colorado’s “economic program,” which the Bilderberg group evidently looks upon favorably.

Asked if he examined the official Bilderberg website upon being invited, Hickenlooper replied, “No,” though he said he looked at a confidential agenda that he had received. “The invitation was sent directly to me,” he said, suggesting it did not go through his staff as was customary. He also told the panel that he understood the hotel cost as well as the air transportation to Italy were his own expenses.

“They sent me an agenda and asked me to describe Colorado’s economic plan,” he further elaborated.

Also, when asked if he knew in advance that Fiat-Chrysler was the host of the Bilderberg conference, he said, “I was not aware of that,” nor could he remember whether he spoke to any Fiat-Chrysler representatives. And when Hickenlooper was shown a picture of him and former CIA Director David Petraeus talking with each other outdoors during the Bilderberg conference, Hickenlooper claimed not to recall what they talked about, while acting as if he could barely remember encountering Petraeus at all.

The bottom line, though, was that Hickenlooper persisted in claiming that he didn’t find it at all surprising or unusual that $1,500 would cover the hotel and scores of other perks. Attorney Staiert, representing the complainant, remarked how “a reasonable person” would normally assume that the cost paid when checking out of a hotel (unless perhaps there’s an itemized list to the contrary) would only apply to the lodging itself. IEC panelists Liz Krupa (chair) and Bill Leone, among others, concurred.

Momentarily mentioning the intrigue and “optics” of Bilderberg, Ms. Staiert also queried Hickenlooper on whether he knew in advance that Bilderberg was “the Super Bowl of corporate lobbying” and whether he had considered “theories” about Bilderberg before agreeing to attend. Hickenlooper coyly replied, “No. I understood it included a lot of senior executives.”

Interestingly, the hearings placed considerable emphasis on Hickenlooper’s attendance at Bilderberg even though it is just one of five trips that have been under scrutiny. As AFP has previously reported, these proceedings bring fresh attention to Bilderberg, coming from an angle that Bilderberg’s organizers would certainly prefer to avoid since the mainstream press has picked up on the story. That’s a sharp departure from the usual situation where, if Bilderberg is mentioned at all in the controlled corporate press, it’s done on a short-term basis and in muted, murky tones.

Among the four other charges McNulty filed with the IEC, the panel cleared Hickenlooper of all but one, finding that he improperly traveled on a private jet owned by a home builder to Connecticut for the commissioning of the USS Colorado submarine, although the panelists agreed that the event itself was a proper state function that benefitted Colorado-a state heavily based on the military.

Amusingly, The Washington Post somehow managed to write an entire article on the IEC’s findings without mentioning Bilderberg, while pitching the story mainly as a political fumble for Hickenlooper since he recently threw his hat in the ring to seek the Democrat nomination to take on GOP Sen. Cory Gardner. The Post is circumspect on reporting on Bilderberg, of course, because the newspaper typically sends its writers, editors or company representatives to the confab and, in so doing, agrees to keep its readers in the dark-a media practice at Bilderberg which goes back decades.

Notably, when the panel asked Hickenlooper about a miscellaneous meal charge at 30 Rockefeller Center in Manhattan in January 2018, pertaining to a lunch with longtime Bilderberger Vernon Jordan, a black attorney and longtime friend of the Clintons, the panelists naively accepted Hickenlooper’s response that he met with Jordan while on a New York junket because of Jordan’s purported activities regarding the legacy of Martin Luther King Jr. What the panel, due to its unfamiliarity with Bilderberg, overlooked was the high likelihood that the lunch meeting was Hickenlooper’s initial invite to Bilderberg, or that he was “sized up” to be invited soon thereafter.

While various media from Colorado to Washington reported or commented on Hickenlooper’s travails, President Donald Trump tweeted: “Democrat John Hickenlooper Held in Contempt After Failing to Comply with Subpoena over Ethics Complaint. Got caught big time with his hand in the cookie jar. Should be the end of his Colorado senate bid. Makes no difference, we already have a great senator!”

The IEC finally ruled June 12 not to impose sanctions on Hickenlooper for contempt for not showing up for the June 4 hearing. “As for the penalties for the ethical violations, the Commission approved a fine totaling $2,750 ($2,200 for the private flight from Colorado to Connecticut, and $550 for the private car service [during Bilderberg] in Italy).  The Commission has not yet issued its written opinion,” IEC Executive Director Dino Ioannides informed AFP in a June 15 letter.

And while that “punishment,” financially speaking, is a mere slap on the wrist and probably should have been more severe, the real value is that for the first time in decades, the attendance at Bilderberg by an elected public official is being associated with backroom dealings and illicit influence in an open public forum-which is a far cry from largely ineffectual protests and other now-routine activities outside Bilderberg’s remote, highly secretive annual meetings-activities that can scarcely pose a major threat to Bilderberg, although the alternative media’s frequent exposure of Bilderberg has undoubtedly slowed the group’s advancement.