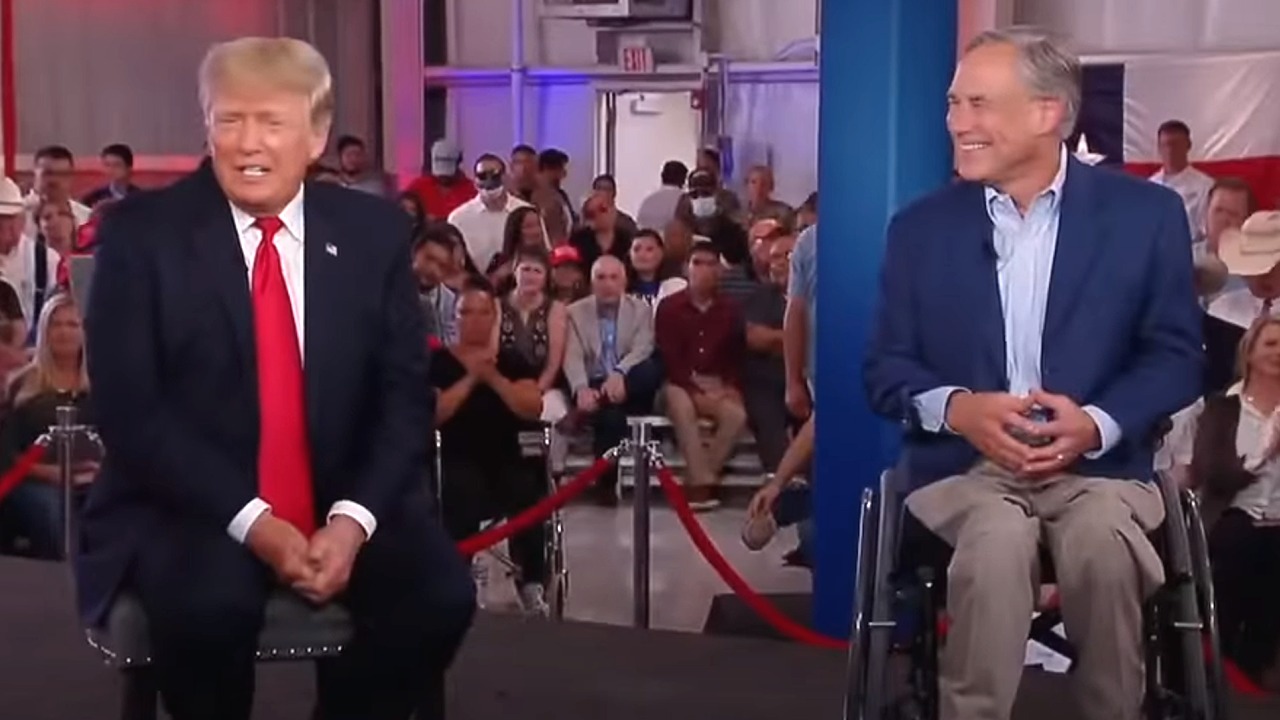 All eyes on Texas governor to see if he will close the huge breach at the U.S. southern border where human and drug trafficking are reaching record levels

EDINBURG, Texas, June 30, 2021—What the border crisis is doing to Texas and the nation as a whole was summed up by former President Donald Trump June 30 at a townhall meeting in the Rio Grande Valley of Texas, attended by World Impact News (WIN). Trump flatly stated: “It’s incalculable how bad this is.”

Accompanied by Texas Gov. Greg Abbott at the Edinburg event, which was moderated by Fox News anchor Sean Hannity, Trump also stressed that a workable, effective solution for a massive border breach—that has resulted in hundreds of thousands of people from scores of countries illegally entering the U.S. on foot, with about 200 wandering children recently found dead in the border vicinity—simply cannot wait until the 2022 mid-term elections.

“Everyone says we [the Republicans] are going to win Congress. But this can’t go till then; something has to be done immediately. It has to be stopped and stopped now,” Trump said, while noting that there has been, and will continue to be, a tremendous cost in terms of lives lost, along with monetary costs that could reach into the trillions.

The lawless behavior that is being allowed by the Biden administration and its open-borders worldview poses an enormous danger to the nation, Gov. Abbott noted. “What is happening here is the erosion of the social fabric of the United States of America. The U.S. was built upon the rule of law. And what the Biden administration is doing is not enforcing the rule of law,” he said.

Abbott added: “The first thing that happens for all the people they are letting in, they know they are getting away with violating the rule of law. That will erode away the United States. It must be stopped.”

President Trump said that when he dealt with the flow of illegal immigrants during his presidency, he had to constantly confer with legal experts on immigration policy regarding what he could do to shore up the borders. In fact, he had to fight 11 lawsuits filed by his opposition to stop him from putting things in place to stop that flow across the southern border, while dealing with Congress’s denial at that time to fund the border wall.

Trump also recalled that he had to resort to the military budget for some of the funding to get more sections of the border wall built, because the border breach was, and continues to be, a national security problem.

Notably, World Impact News in 2019 shot a news video at a border wall construction site near Donna, Texas. The video, posted on this website, is called “Border Policy is Foreign Policy,” in order to stress that when hundreds of thousands of people from multiple foreign nations are invading the U.S.—although some genuinely seek and may deserve asylum on a case by case basis—the U.S. is dealing with national defense in the context of relations with foreign relations. Yet, it’s exceedingly rare for the Establishment media or lawmakers from either major party to equate the ongoing border crisis with foreign policy, even though the border situation clearly involves various aspects of foreign policy.

This failure to see the border crisis for what it is—a foreign policy problem, or what one might call a failure of foreign policy—puts the matter in the wrong context. Consequently, this issue has been reduced and presented to the American people almost solely as a logistics and law enforcement problem, especially in terms of how many miles of wall to build (if any more gets built), how many more state police and national guard to deploy, how many more detention centers to build etc.— important though those things are.

But diplomatic relations and discussions between the nations whose people are illegally entering the U.S. and the United States government are rarely a topic on the nightly news or in the halls of Congress. Since Gov. Abbott said at a June 10 Del Rio, Texas border summit with ranchers and law enforcement that people from up to 160 countries have been illegally entering the U.S. from early 2021 to the present time, it’s become clearer than ever that urgent meetings ought to be set up between U.S. envoys and the leaders of those countries. World Impact News’ own assessment is that this is a multi-national international problem that needs to be treated accordingly.

Abbott clarified, “What we have in the State of Texas is a battle for the soul of our economy. Are we going to be capitalists or are we going to be socialists?” He further stated, “We’ve seen the socialist agenda through [Texas Congressman from El Paso] Beto O’Rourke and [former San Antonio mayor] Joaquin Castro, and people like that. Texas must prevail, we must keep Texas [capitalist].”

He added: “Let me tell you this last thing that Democrats will not and that is, it has been capitalism, not socialism that’s lifted more people out of poverty than all of the socialistic programs in the history of the world. We are not going to let socialists take over.”

There’s a general consensus among most conservatives / Republicans that the Biden administration wants to destroy this nation and has removed everything Trump put into place to protect our nation and its borders. Biden’s policies have tied the hands of the Border Patrol and associated agencies whose job it is to secure the border and he has weaponized the immigration system to spur a massive flood of illegal crossings into the U.S.

Lest anyone assume this wasn’t planned prior to Biden being allowed to act as the President, let’s remind ourselves of what he said on September 12, 2019 in the Democratic debate. Biden said, “What I would do as President . . . I would in fact make sure that there is—we immediately surge to the border all those people that are seeking asylum.”

And according to an immigration attorney to whom World Impact News spoke, over 70% of all asylum cases are denied and when that happens it is over for that individual to ever petition the government to become a U.S. citizen again.

Meanwhile, Abbott feels like Texas has been left to fend for itself and left to its own devices since Biden, as if Texas is some unincorporated outpost that the Federal Government doesn’t care about anymore. That, in turn, is seen by the rapidly growing Texas Nationalist Movement as a green light to pursue Texas nationhood.

The State of Texas can make the same apprehensions of illegal crossers that the Border Patrol can make, but they would then probably jail them at taxpayer expense and eventually have to turn them over to a federal system that’s seen as being far too lenient and treacherous, so what Texas is doing through the Governor’s newly declared “Border Crisis Disaster Declaration” is to arrest and jail anyone who illegally enters the U.S., particularly those who commit additional crimes besides entering the U.S. illegally. Abbott also announced he’s crowdfunding online to raise funds for what he claims is a state-level effort to finish the border wall project that Trump started by adding about 450 miles to it, but Biden brusquely abandoned.

So, besides building wall sections to fill in current gaps, the state says it will work with Sheriff’s Departments to enable them to arrest people and put them behind bars and not give them the red-carpet treatment that Biden administration is giving them.

Meanwhile, Kinney County rancher David Calame, founder of Texans for Closing the Border, after attending Abbott’s June 10 Del Rio border summit, told WIN before the Edinburg townhall meeting that he and more than 10,000 other ranchers, farmers and various other citizens who signed up for his organization in just its first six weeks of existence simply want the border closed and the illegals deported—period—while saying that all necessary State National Guard, law enforcement and deputized citizens should be brought to bear to do the job.

Calame said on an edition of “STOP THE PRESSES!” radio show on June 23 on the Republic Broadcasting Network (produced by WIN’s Mark Anderson) that he is not altogether confident that Abbott will sufficiently follow through on his border promises, thinking that Abbott’s remarks at the border summit and at the townhall are more geared toward scoring re-election points than anything else. Here is a link to that radio show: https://www.republicbroadcastingarchives.org/stop-the-presses-with-mark-anderson-06-23-21/

The takeaway at the Edinburg townhall was that Abbott’s powers may be limited when it comes to certain things like deportation, but that doesn’t mean Texas can’t do something about the illegal immigration crisis. So the apparent idea is that the Governor of Texas, along with President Trump, will work together along various lines to send a strong message to everyone involved in the crisis either directly or indirectly that coming in the country through the Texas border will not be tolerated and will be stopped.

It also was mentioned at the townhall that other states such as South Dakota and Iowa are stepping up to help, but nothing was discussed on the specifics of how they will be helping Texas to stop the surge across the border.
Stay tuned for updates of this article and new articles on this crucial issue.

SIDE NOTES: BROOKS COUNTY, TEXAS AT A GLANCE:

According to Sheriff Martinez of Brooks County